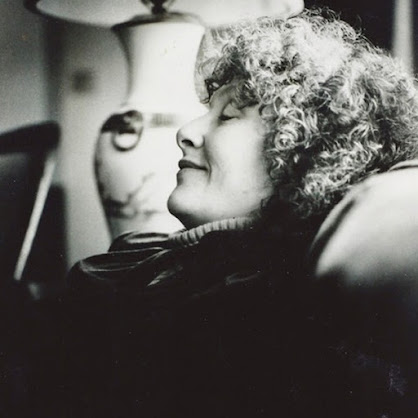 I first encountered the name Denise Levertov when I was in my early twenties. Reading accounts of twentieth-century poetry, I noticed that she was almost always the only female writer linked with Black Mountain Poetry, the influential school of mid-century American poetry centered on Black Mountain College in North Carolina. Levertov was frequently mentioned alongside Charles Olson, Robert Creeley, and Robert Duncan. Admittedly, this gender disparity didn’t prompt a trip to the library to peruse her writing. It would take her presence in a mid-century educational series to lead me to engaging with her work in a meaningful way.

The 1960s saw the production and release of Richard O. Moore’s USA: Poetry, a documentary series showcasing the work of those that have since become pivotal figures in modern poetry. Episodes were devoted almost exclusively to men: William Carlos Williams, Allen Ginsberg, Gary Snyder, John Ashbery, Robert Lowell, Frank O’Hara, Olson, Creeley, Duncan, and many others were featured. (As of this writing, many of the episodes are available online.) What had me excited about this series when I discovered its existence was the prospect of seeing and hearing Olson read his poetry. What little I knew of the 6’8” man responsible for “Projective Verse,” the 1950 essay-manifesto that declared poetry must be a “high energy-construct” in sync with the kinetic possibilities of the body, had me convinced it would be a lively show. I remember it being just that: Olson gregarious, wide-eyed, loud, perhaps a little bit drunk.

But what made a greater impression was Levertov, the woman spotlighted in the first half of the episode. Unlike Olson, whose reading had linked a voice and face to a name, Levertov’s reading had me enthralled by her words. Sure, I noticed her voice, an English accent through a missing front tooth. I noticed, too, her cat-eye glasses and bee-hive hair. But these things receded from attention when she began reading her poetry, especially when she read the poem “Losing Track.” Here it is in full:

Long after you have swung back

I think you are still with me:

you come in close to the shore

and nudge me awake the way

a boat adrift nudges the pier:

am I a pier

half-in half-out of the water?

and in that pleasure of that communion

the moon I watch goes down, the

tide swings you away before

mud sucking at gray and black

Acknowledging the line breaks and enjambment by slightly pausing or changing her tone, Levertov carried me gently to the poem’s final line. Here, I remember thinking, was a poet who was aware of the tactility of language and the function of the line, how they could be shaped to convey a nuance like the swaying sense of proximity and distance sometimes experienced between people.

Later in the documentary, when Levertov recalls her frustration in being unable to write a poem about the Vietnam War and gestures toward the difficulty of representing violence in a way that satisfies both aesthetic and documentary exigencies, a bitter-sweet feeling washed over me. I was at once disappointed with myself in having repeatedly overlooked Levertov and delighted by the prospect of learning from the work of a technically proficient and politically conscious poet. I remember checking out several of her books from the library, worried that even if the poetry was good my reading would feel like penance for my past inattention. Wonder toward her depictions of the natural world (especially that of the Pacific Northwest), awe toward her intelligence shown in treatment of the Vietnam War and Gulf War, respect toward her honest interactions with doubt and the numinous: these feelings were present while reading her poetry. It would be wrong to describe such an experience as anything like penance.

Immersing oneself in the poetry of Denise Levertov is to become acquainted with a unique creative being, one who consistently brought to her writing a belief in the restorative power of the environment, a deep concern for social justice, and an interest in how people experience wonder, joy, grief, and pain. I return to Levertov often for these qualities, for how her imagery subtly plays with thought and feeling, and because her poems leave my spirit feeling lighter.

I could cite many poems for what they have taught me, but I’ll note one I hold to be among the most important. It’s one of the first poems I encountered by her back in my early twenties. It’s also one of several poems that made me realize reading poetry can be more than an academic exercise. It helped me realize that reading poetry can be a way of being emphatically present in the world. What do I mean by this? I’ll get to this shortly. First, here’s “The Five-Day Rain,” as it appeared in Donald Allen’s influential anthology The New American Poetry 1945-1960:

The washing hanging from the lemon tree

and the grass long and coarse.

So light a rain

pending above the rigid leaves.

to forget who I am, what has burned me,

and hang limp and clean, an empty dress –

Levertov creates a scene through unaffected language, then gives us two emphatic imperatives (“Wear Scarlet! Tear the green lemons / off the tree!”) and ends with a self-inquisitive voice. I feel much the same about this poem as I did upon reading it for the first time. The suddenness of the imperatives encourages us to reread the poem and pay attention to what precedes the emergence of a voice concerned with her identity. In my case, I focus on the presence of “washing” in the important first line. Then I note the words “broke,” “tension,” and “pending” as prefiguring the exclamations in the final four lines. Based on these cues, all of which seem to relate to being worn down, I think the poem depicts a woman on the verge of lifelessness, strongly urging herself to wear scarlet and rip lemons off trees to fend off the feeling that domestic life is extinguishing her spirit.

By pointing to the status of women in history in such a compelling way, “The Five-Day Rain” joined a circle of poems that helped twenty-something me realize that the imagination is co-extensive with empathy. To write in such a way as to make a lived reality even partially known is to create an object capable of transforming another person. To be a reader receptive toward this object is to allow another person to become part of your pregiven world, the meanings that underpin your way of being around others. I am grateful to Levertov for helping me come to this realization and for the ongoing nourishment that is her writing. I’m a better reader, writer, and person because of both.

M.W. Jaeggle’s newest chapbook is Choreography for a Falling Blouse (Frog Hollow, 2021). His poetry has appeared in The Antigonish Review, CV2, The Dalhousie Review, Vallum, and elsewhere. He lives in Buffalo, New York, where he is a PhD student in the English department at SUNY Buffalo. He tweets rarely @underapricity