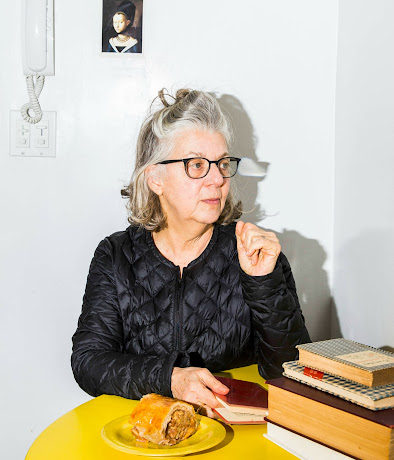 When I first saw the name Maira Kalman, it was while browsing around a book warehouse—the kind of store where many older books are kept and treasured until their next owner comes by, someone like me. I was only about fifteen at the time, but my eyes always gravitated to the ‘kooky’ or aesthetically pleasing book covers, even if I thought an ‘aesthetic’ was more on the side of fashion and cosmetics. For me, any book that could keep my focus from the outside deserved a read on the inside. And the Pursuit of Happiness did just that—it lured me in. The mimicry of a graphic novel approach from the front cover made me quickly purchase it with no regard for what may be inside; the title, a famous line from the Declaration of Independence, and the front photo of Benjamin Franklin were enough. Little did I know the author’s foremost love of being an illustrator at the time.

Being a Canadian teenager with a love of American history and politics wasn’t necessarily the most popular ideal growing up. I learned to love it because of my family’s love of all things America—we would visit Florida and various other states multiple times a year for vacations, so I grew up with a deep attachment for the country I considered a second home. For being fifteen, my assumptions of why this book would be in a warehouse rather than prominently displayed at a bookstore chain lied in the fact that this text was, at face value, for Americans. If it’s American, then it isn’t ‘patriotic’ enough to be considered a sellable item in Canada. However, thanks to Maira Kalman, I have a new appreciation of the democracy that lives in me, as a Canadian, just as much as my neighbouring American.

And the Pursuit of Happiness makes me want to learn about the country I live in—it plays with the idea of democracy and how life can be better if we open our eyes to the details and possibilities around us. The book mainly revolves around Kalman’s journey over a year to discover democracy in all its adequacy and inadequacy. Though this yearlong adventure trip took Kalman around different states, her starting point for the book stems from the location of all things American—Washington, D.C. Kalman has an impeccable way of describing thoughts, feelings, and emotions through just a few words on each page—making the imagery she draws the focal point of the book.

Though “The Inauguration. At Last.” is the first chapter of the book, I already felt a sense of pride from the author’s drawings—they are each describing a scene where a motion of change occurs or can occur because of the 2008 presidential election—Barack Obama won, so Americans were entering a different chapter of life. How would this new voting result affect the country already partially divided on cultural issues? As my family and I watched the voting results happen, I was met with various thoughts from all sides of the political border. I grew up in a predominantly Conservative political view—so, the Canadian version of a Republican. I think it’s safe to say that most of my family’s view on the 2008 presidential election was more out of the disappointment of their American “comrade” losing to a Democrat. Since I wasn’t of voting age, I watched more to see the reactions from both my family and the news media. This is another reason why I was so curious to see what Kalman had to say on the idea of American democracy.

That first chapter spoke so much to my masked vision of politics I was so familiar with. The focus of “The Inauguration. At Last.” was simple—the word Hallelujah. Throughout each page, Kalman dove me in, letting me feel like I am alongside her on this journey of discovery. For example, one of the pages involves a straightforward drawing of a pink chair with books stacked on it—the writing is simple, yet prolific regarding the image shown: “Hallelujah for knowledge and for the honor of language and ideas. And books. For Jefferson’s glorious library full of Cicero and Spinoza and Aeschylus and Thomas More and books on bees and trees and harpsichords all intact in the Library of Congress” (Kalman 22). Though the imagery on each page is captivating, it’s simply a starting point of how Kalman’s ideas are portrayed to the reading audience. For me, the inner pages of the book never disappoint from the front cover I was so entranced by.

Even the pages which contain only notes from Kalman are written in such a way that keeps the aesthetic of imagery intact. The author’s approach to democracy is almost like a memoir, especially on the discussion of the goings-on if Kalman knew Lincoln: “I would confess to him that I would love to live in the Lincoln Memorial. Just a simple cot in the center of the space. I would make my bed and sweep. Drink tea. My neatness and happy aspect would amuse him. In the evening I would embroider his words onto fabric. Words that seem so apt today” (Kalman 90).

Through both images and words, Kalman adds a touch of humour in everything she says while still keeping the overall idea of the work intact: will we ever true the true pursuit of happiness?

Where is happiness? What is happiness? What did Thomas Jefferson mean? The pursuit of happiness. I visit Dr. James Watson. Maybe there is a genetic explanation for happiness. And all we need to do is take a pill that puts it into action. I asked him. He could not tell me because no one really knows. And anyway, everyone has to be sad part of the time; otherwise, you would be insane. I looked at him. He takes walks. Plays tennis. He works. He looks at trees. Those are good ways to find happiness. To find peace of mind. Me? I work. And walk. And go to museums. (Kalman 458-461)

Though Kalman spends an entire year investigating American democracy, her happiness still lies in simple things. This ideal spoke volumes to me: though there are many political views and cultural issues around me, I am still Canadian. I still go for walks, play Scrabble, and go on scenic drives around the city I live in. Maybe my idea of happiness isn’t a pursuit. I’m now able to see that my happiness lies in the simple moments that leave a lasting significance as I continue my journey of self-discovery. Thanks to Maira Kalman with And the Pursuit of Happiness, I’m able to see that the freedom to be who I am is what democracy is all about.

Cheyenne Siles was born in St. Catharines, Ontario, Canada & graduated from Brock University with a Bachelor of Arts in Writing, Rhetoric, & Discourse Studies. She is a book editor for a ghostwriting company. Cheyenne considers herself to be a driven woman with a love of all things literacy. She also has an Associate of Science in Computer Information Systems. If she isn't editing a book, you can find her reading for leisure, spending time with her husband, or finding new treasures for her skull collection.