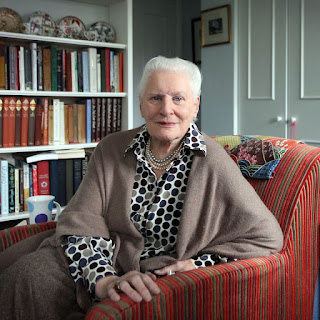 On Not Meeting Diana Athill

Why don't you find a way to get in contact and see if she'll meet with you? My partner asks, after I explain that Diana Athill, aged 99, whose memoir I have just put down on his bed, lives less than an hour’s train journey away and served as Jean Rhys's editor for the publication of Wide Sargasso Sea. It is 2017. I am living in the United Kingdom, writing a graduate thesis on Rhys’s early novels, and using Athill as cheat reading—relevant, but really more for pleasure than study.

The prospect of contacting Athill is thrilling, but I quickly push the idea aside. She feels too known and yet unknowable. She is someone I admire immensely, and yet would be too embarrassed to meet. Not that I would have had a way to contact her, or that she would have met with me.

Throughout much of her life, Athill was exactly the kind of person you would expect to become a literary celebrity. She was of old British stock, solidly middle class. She studied at Oxford in the 1930s and then became, through her work with writers like Rhys, V. S. Naipaul, Molly Keane, Mordecai Richler and more, one of the twentieth century’s most significant literary editors. She was brilliant and stubborn, knowing just when to step in, and when to leave her writers alone, to help them bring their most important works to publication. She published her own works of fiction and nonfiction starting in the 1960s and, though, she did not really experience acclaim until quite late in life, was unwavering in dispelling gestures of pity. “I can't think many centenarians are still living by their pen,” she exclaimed often in later life. I can’t either.

Charming, un-precious, resolutely cheerful, and determined, in sentences as streamlined and ornate as the consciousness they transcribe, Athill’s memoirs detail episodes of heartbreak and triumph, how she had two abortions, when the procedures were still illegal, and later a near-fatal miscarriage. She writes of her long and, at the time controversial, inter-racial relationship with the playwright, Barry Reckord, and how they opened their relationship—or rather he did, with her consent and later encouragement—to a vibrant and intelligent younger woman when Athill gradually, but not too sadly, felt her sexual appetites fade with age.

“Loyalty is not a favourite virtue of mine,” she asserts in one passage, taking her own life as her subject, as Rhys did, and proving herself much more interested in deconstructing social expectations than in conforming to them. Honesty she valued, but not ownership or obligation. “And whereas I was ashamed of my limitations within the office,” she clarifies in Stet, “I was not ashamed of valuing my private life more highly than my work.” She put herself first, not in a selfish, but in a self-respecting, self-affirming way. “That, to my mind, is what everyone ought to do.”

Later that spring and summer, as I completed my work at the university and my Visa permission neared its end, my life pitched into a sudden, if predictable, tumult of despair. I had begun to suspect that academia might not get me where I most want to be and my still-new romantic relationship had begun to feel both impossible and urgently important. I imagined Athill nodding. This is a common enough story. Writing and even reading for pleasure became unbearable, but I kept turning Athill’s pages like life vests that were keeping me afloat. “There was one sleepless night of real sorrow,” she writes of a particular period of change, “but only one night.” My period of sadness lasted considerably longer, but then, just as it had for Athill, “another voice began to sound in my head.” Importantly, not Athill’s but a version of my own.

Athill offers no platitudes. She teaches no lessons, excepting, perhaps, to “avoid romanticism and abhor possessiveness.” Her writing didn’t save me, but it provided important perspective and a model for courage when I needed it most. After all, Athill is always fully herself, in her use of language as in the interactions she recounts on the page. No matter what losses she suffers. No matter what does or does not come to pass. And I realised that I would be too: fully myself, not in a philosophical, but in a real and practical sense. Whether the relationship ended or didn’t. Whether I figured out how to write and teach and pursue the life I wanted right away, or not for another fifty years.

I never did meet Athill, of course. Just under a year after leaving the UK, I moved back again, Visa situation (temporarily) resolved and feeling high with recklessness, choosing sex and love and an invigorating sense of self-determination over the safety of academic progression, or even a concrete plan. Athill died in 2019, aged 101.

Shortly after her passing, I made my way to an iconic Cambridge bookstore and picked up a copy of Athill’s final book, having borrowed it from libraries on two continents again and again. The alley onto which the bookstore faces was bright with new green leaves. The gentleman behind the counter accepted my selection with usual reserve, but then caught sight of Athill’s cover and positively beamed. “Have you read her before?” he asked. “She writes the most exquisite sentences.”

He handed me back my change and Athill’s memoir, permission, in my life, to keep reading and writing. More than that, permission never to compromise of the self in between.

Genevieve Zimantas is a writer and educator from Montreal. She holds degrees from McGill University, Dalhousie University, and the University of Cambridge, has volunteered as a correspondent for the OWP, served as an associate editor for the Dalhousie Review, and was the QWF’s 2018 poetry mentee. Her poems and essays have appeared in journals across North America including Event Magazine, Prairie Fire, Contemporary Verse 2, Rhino Poetry, Arc Poetry Magazine, and elsewhere. She lives in the United Kingdom.