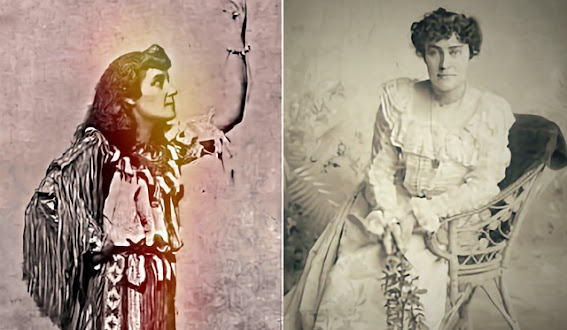 Making her own path

When my cousin Laura Ireton was in high school she won the Modern History Prize. The prize that year (1927) was a copy of Pauline Johnson’s Flint & Feather, a hardcover embossed, with photo plates within. Ireton went on to be a teacher. Our lifetimes barely overlapped. When I was in primary school, at her estate sale, I bought boxes of her books. I read the primary readers of that generation. The top prize of the grab lot was Pauline Johnson.

I had books of Tennyson and Shakespeare, Burns, and  Rudyard Kipling but this poetry was something different. This was writing in a way I could easily understand. She was not only not in Europe, but in Ontario near roads I had travelled, writing about forests and rivers with passion. You can write of corn and paddling and pathos and storms. Landscape could be a subject.

This was a writer who needed no man and child, a writer who travelled far on her own terms. This was a woman who fit into no world, her father being one group and her mother another. I too felt in neither world of either parent myself an had to make a new path that they could not lead me to.

As a teen I memorized some of her poems, and pacing the night fields, recited them to the stars,

soulless is all humanity to me tonight
my keenest longing is to be alone,
alone with god’s grey earth that seems
pulse of my pulse, consort of my dreams…
crave but I to slip through space on space
till flesh no more can bind…

It was perfectly heartfelt for the emotional swells of teenage years…

Poetry books were not easy to come by and hers became well-thumbed. I wanted to attend her performances where she flung from identity to identity, like a magician changing onstage from those high upper class whalebone clothes to the equally camp concoction of “Indian clothes” thats she whipped up from her imagination and what cloth and leather she could find. She invented as she went, with a quick ear, made improv.

At the white salons she told of the dramas of Indian braves and to the miners she did satire of the upper class ladies, fitting in well enough with either.

Pauline was impulsive, having no budgeting skills and giving away all her money at one point. Although her dad was chief, she lived in a house with servants and slaves and probably never went to the reservation. She ran off to do her one-woman show instead.  What was a young woman, unmarried to do to earn her living? Her sister and brother worked in town, passing as white clerks, but then her sister Evelyn was a different temperament, careful and diligent. Her memoir was more detailed than Pauline’s poems. (I wonder what she would have written.)

In case you aren’t familiar, Pauline's poems are online here. (At that site it explains her Mohawk name, Tekahionwake, is pronounced dageh-eeon-wageh, meaning literally: ‘double-life’). She billed herself as the Indian Princess, being a daughter of a Mohawk chief. She had her black and white publicity photos coloured, for her to look more indigenous, than her wavy brown haired and blue eyes.

Around 2010 I did a Schrödinger’s poet presentation at the Tree Reading Series on Pauline. In 2014,  PurdyFest #8 held a symposium on Pauline Johnson.  Although I’d read her poems and four books about her, I didn’t present, feeling myself under-equipped. At the time I realized I could have things to say. That’s what Johnson keeps teaching, step up. Speak where you are at.

Pearl Pirie (she/her) is a queer poet living in rural Quebec. Her fourth collection is the well-received footlights (Radiant Press, 2020). Follow her at @pesbo on twitter and @pearlpiriepoet on Patreon and Instagram. www.pearlpirie.com