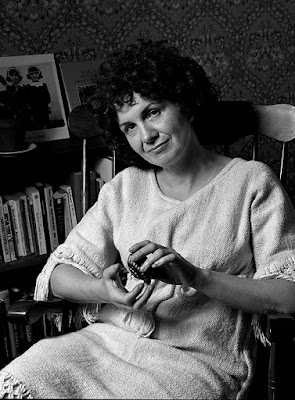 My Lonely Summer with Alice Munro


One summer, while visiting my hometown, a small mountain-locked settlement in Western Canada, I read an Alice Munro story every day for a month straight. After days spent serving customers and wiping down counters in a local cafe, it felt like a necessity; the only assemblance of an intellectual routine. I read her stories by the lake, on the margin of sand between the shoreline and the industrial train track; I read them on my back, legs crossed, book blocking out the sun like a small square flag. Sometimes a train would rumble past and alert me to my environment, which seemed less real than Munro’s black spruce or her fast-flowing, dark and narrow streams, which coursed through many of her stories, linking them the way rivers connect distant parts of the continent.

It was a lonely summer, my summer with Alice Munro. I was frustrated by the fact that my old friends now had boyfriends and permanent jobs and no longer made time for me, a precocious humanities student back from her studies out east, eager to show off the new words she’d learned. No one cared. I was – and the irony was not lost on me – essentially, an Alice Munro character. Juliet visiting her parents in Runaway—subtly punished for her “odd” life choices. (“Odd choices were simply easier for men,” remarks Juliet, “most of whom would find women glad to marry them.”) Or Del in the Lives of Girls and Women, whose restless ambition, but simultaneous desire for conventionality, disturbs the social equilibrium of her rural community. I read Munro’s stories to find myself in them but also to distance myself from the unhappy women I encountered in them. I would do better. (Secretly, I knew I would not.)
Years later, I would learn that Munro herself had lived in this very town, surrounded by furs and glacial lakes and annual forest fires. Shortly after her separation from her husband in 1973, Munro moved to Nelson, British Columbia, to teach at Notre Dame University for the summer. In September of that year, with her two daughters, Jenny and Andrea, she moved back across the country, relocating from Victoria to London, Ontario. Notre Dame University doesn’t exist anymore, and the town has changed significantly since the 70’s, yet this could well be the landscape that flashes past the train window in many of Munro’s travel stories—or escape stories—in which a young woman, usually precocious and eager to ascend above the her working class roots, buys a train ticket and heads west or east, anywhere “elsewhere.” This ideal of “elsewhere” occupied most of my imagination’s real estate as I disinfected the walk-in fridge or scraped the sesame seeds from the café’s industrial-sized toaster, or when my boss yelled at me in front of customers for putting sprouts on a hotdog bun: the kind of people who order hotdogs don’t eat sprouts!
Perhaps I hoped I’d meet a medical student, like Nancy does in “Powers,” or a history professor-in-training, as Rose does in “The Beggar Maid” – someone with horn-rimmed glasses, good connections, and inherited wealth, who would whisk me away to a strained but advantageous married life, somewhere in the Vancouver suburbs. That might be proof that I was normal. At least, I thought, it would temporarily solve the problem of loneliness.
But I did not meet anyone of this description, not that year, or the next. Alice was all I had.
What my education in stories yielded that summer was a profound, multilayered, often contradictory, often circuitous articulation of what I would come to know as the double standards and asymmetrical power relations that shape women’s lives. I was learning to put words to the growing frustration that since the age of fifteen had been inherent to my experience of the world. I was beginning to understand that the pain of being female—of having a predetermined narrative thrust on my life—was not personal but rather systemically produced. The difficult feelings that I shared with Munro’s female narrators were not simply a consequence of unsettled chemistry but rather a response to structural injustice.
Being able to articulate this constraint brought its own kind of joy. Even when the café I worked for went bankrupt – perhaps due my unorthodox hotdog garnishes – and I had to forgo my last month’s pay, I held onto the thread of that joy, as it bore the evidence of a more expansive world, one where conventionality was questioned and oddness appreciated.
Now, at least once a summer, I’ll find a pool of shade, and submit to the author who, from the hard-fought-for privacy of her laundry room, changed the scope and, indeed, the genre of the short story. This ritual reading is no longer an act of self-improvement as it was when I first met Alice; it not even an act of self-recognition. It is simply a visit with an old friend – one who is enormously wise, unsparingly honest, and, therefore, forever trusted, forever treasured.

Kasia van Schaik is a writer, editor, and critic living in Montreal. She’s the author of the poetry chapbook Sea Burial Laws According to Country (Desert Pets Press 2018), and her writing has appeared in Canadian and international publications such as Electric Literature, the Los Angeles Review of Books, The Rumpus, CBC Books, This Magazine, Jacket2, Prism International, and The Best Canadian Poetry Anthology. Find her at @kasiajuno