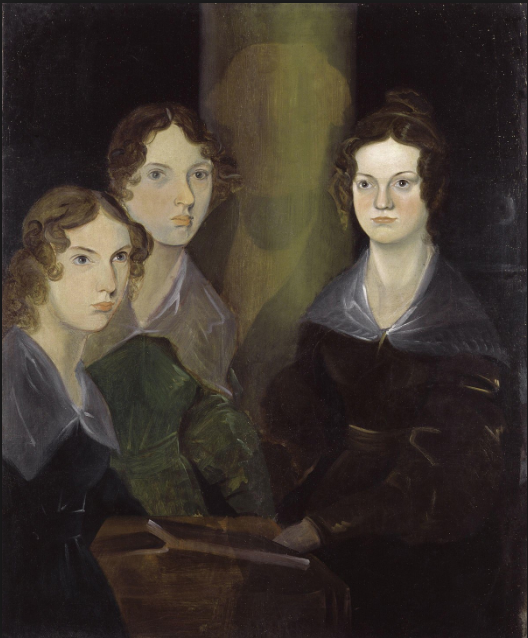 
Just after nine o'clock, I arrive at the door, cross the clean sandstone tiles of the hall to the dining room.  Family prayers are over.  Patrick Brontë says goodnight, cautions his daughters not to stay up too late, and, on the way to bed, halts, as he has done every night they can remember, to wind the tall grandfather clock halfway up the stairs.  Charlotte, Emily and Anne read aloud from their manuscripts, circling the dining room table.  Its scratched surface, burnished by long use, is marked by inkblots, an assertively carved "E," a darkened patch burned by an unattended candle.  Unseen, I pace too.  They speak of a wedding veil set on fire, three graves by the moors, chess with an unwanted admirer.


Charlotte and Emily entered my imaginative life via a two-volume set of novels, dark green with gold embossed spines, my mother's books that she shared with me.  On the cover of Jane Eyre stood a double line of miserable boarding school girls, hands clasped before them, clothed in high-necked black dresses, all with identical cast down gazes except for one, whose eyes were open, Jane.  On the cover of Wuthering Heights, a wide-shouldered Heathcliff braved the elements under a massive oak tree, leaning against its trunk, overcoat billowing, head flung back.


At nine, in the aftermath of divorce and the loss of my home, I felt pulled immediately into the world of orphaned Jane Eyre.  I met Jane indoors on a tempestuous day, reading secretly behind the curtain of her window seat.  The green fabric cover of Charlotte Brontë's novel was a door I likewise found to escape the present.  Opening it, I could wander alongside Jane who spoke her mind bluntly and confided in me:  Reader, I married him!


In high school, my English class was assigned Wuthering Heights.  I played the parts of both young Cathy and Hareton in a talk show skit (though I was late for my cue as I struggled in the hallway to remove the opera-length gloves of my Cathy costume so I could reenter the classroom as Hareton).  Wuthering Heights was very different from Jane Eyre, darker, streaked with poetry.  Emily found words for things I'd thought beyond language.  She explained how dreams can arise from darkness and stain one's consciousness indelibly: "I've dreamt in my life dreams that have stayed with me ever after, and changed my ideas: they've gone through and through me, like wine through water, and altered the color of my mind."  Her description rang true of how an attachment rooted in the intense allegiances of childhood might later go off the rails, with damage to generations.


I didn't meet up with Anne Brontë until mid-life, when I found myself housebound due to a nerve injury.  After several years of impaired cognition, which had cost me my career as an English professor, I was trying to regain the capacity to read fluidly and to remember what I read.  One afternoon, an eighteen-year-old acquaintance asked if she and a friend could come over to show me a paper they had written together about Jane Eyre.  The company of two bright, creative young women fueled my efforts to recover my former reading abilities.  I wanted to rise to the occasion of our regular discussions over tea at my apartment.  I discovered Anne Brontë's Agnes Grey and The Tenant of Wildfell Hall as we read our way through the sisters' seven novels, along with their poems, juvenalia (stories about Branwell and Charlotte's Angria and Emily and Anne's Gondal), letters and diary entries.


Anne was the most feminist of the Brontës.  Less influenced by her brother, Branwell, she avoided her sisters' romanticization of the bluster and egotism of manly Byronic lovers.  In her novels, Anne imagined an England in which a woman could sell paintings for a living, fall for a man who was neither violent nor aloof, even herself propose marriage.  As a result, Anne came under ad feminem attacks.  The scandal was not so much that The Tenant of Wildfell Hall depicted domestic violence and debauchery but that a woman had dared to write of such things.  Answering her critics, Anne made no bones about her egalitarian view that she should be as free as any man to choose her subject matter: "All novels are or should be written for both men and women to read, and I am at a loss to conceive . . . why a woman should be censured for writing anything that would be proper and becoming for a man."


Charlotte Brontë once disparaged Jane Austen for putting the passions at an arm's length, seemingly refusing "even a speaking acquaintance with that stormy Sisterhood." That stormy sisterhood!  A fitting epithet for the Brontë trio themselves.  They were both sisterly, attached as sibling-literary collaborators, and passionate in temperament, holding to the full intensity of their beliefs, even when doing so meant being tarred as "coarse."


Several years after my Brontë reading group formed, I was able to travel to the parsonage in Haworth.  There I discovered the Brontë sisters' material lives: a pencil sketch of a broken window signed and dated by the artist "aged ten," a spattered paintbox with cakes of color still intact, bottles of ink and sealing wafers with messages like "Excuse haste," an old quill pen along with a hundred steel nibs for a wood-handled one, pebbles from the beach at Scarborough.  Despite adversity and illness, the Brontë sisters kept to a daily routine, whether it was peeling potatoes and changing bandages or stringing sentences together and revising manuscripts.  By their example, the Brontës showed me how writing is as physical and as embodied a struggle as preparing food, nursing an aged parent, and working through illness.  The trio had become my companions and witnesses.  Despite radically altered circumstances, I could set my sights no lower than the goal of returning to who, at heart, I had been before: a reader and writer.

Eve Rachele Sanders is a writer living in Montreal.  A recipient of a Mellon Fellowship in the Humanities and a National Endowment for the Humanities Grant, among other awards and grants, she received her Ph.D. in English from UC Berkeley and is the author of Gender and Literacy on Stage in Early Modern England.  Recent poetry and non-fiction of hers appear in Carte Blanche, Dark Matter and The Antigonish Review.


Portrait by their brother, Branwell