Arielle Burgdorf on Liz Worth 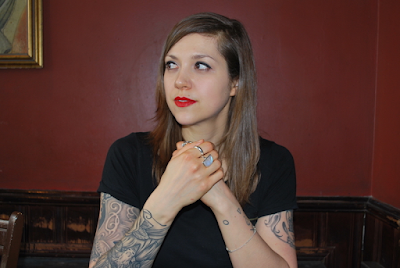 I used to work for a beloved bookstore in San Francisco. I was not particularly good at this job (especially the parts that involved math), but I liked it because I could occasionally hide in the stacks and steal time reading. Certain moments approached magic, when I would stumble upon an author whose work resonated so strongly with me that I felt they were mine.  Previously, I had not thought of myself as someone who could write poetry or was very interested in the poetic form, but because I was frequently assigned to shelve poetry I would often end up in the corner nook, searching for something new. A loud pink and yellow cover caught my eye: No Work Finished Here by Liz Worth. And the audacious subtitle: Rewriting Andy Warhol.


Honestly, I was never much of a Warhol fan. I was far more interested in Valerie Solanas, the woman who shot Warhol, and even named one of the characters in my first novel “Val” after her. I loved Solanas’ problematic but hilarious satire S.C.U.M. (Society For Cutting Up Men), but Worth took this even one step further by literally cutting up Warhol’s book a, A Novel. The original piece is around 500 pages long; a difficult conceptual read, to say the least. Like most of Warhol’s art, people either loved or hated it. Worth’s version is startling new and easily accessible. Her poems are short, sharp jabs, crystallizing where Warhol wanders and conceals. Worth captures a city of leather, pills, melting gender, sleepless nights, desperate girls in hiding, girls that keep threatening to kill themselves, the down-and-out uglyglamorous. She appropriates Warhol’s text in a daring and decisive manner, mutilating his words until they say something different from the original, monsters able to stand on their own.


I would flip to random sections as I pretended to shelve every day, turning up fleeting moments of brilliance such as:


Maybe we could start


a filthy section of dawn


and be transported to a glistening New York night years before. I decided I had to take her home, but the cover price, even with my discount, was out of my price range. I told my coworker, who advised, “Buy it when X is working.” X was the guy who was in charge of the poetry section. I brought it up to him hesitantly one day and he charged me something like a dollar, winking,“We’ve had that for ages and it hasn’t sold.”


I took the book home, believing in something like fate, like I had uncovered another part of my literary circle, a lineage of feminist cut-up and collage that included Kathy Acker and Dodie Bellamy. When I found out Worth had also written an oral history of the Toronto punk scene I became even more convinced we were linked. Although I know No Work Finished Here is meant as a homage to Andy Warhol, I see it as a punk, feminist retelling of his world. When Warhol’s voice is whittled away, what remains are the voices of his muses-- the Candy Darlings and Edie Sedgwicks smoking their cigarettes in the shadows while the camera silently rolls. I now use collage and appropriation in my own poetry because Worth opened that door to me. Curled up in my bedroom at night, restlessly leafing through No Work Finished Here, Worth reaffirmed what I had always suspected: the ones you need the most find you.


Arielle Burgdorf is a writer from Washington, D.C. currently living in Pittsburgh while she pursues her MFA at Chatham University. She writes stories about dangerous girls, queers, runaways, and other underdogs. Her work can be found at Maximum Rocknroll, Feministe, The Feminist Review, Horseless Press, Bone and Ink Press, and various bathroom walls.

Email ThisBlogThis!Share to TwitterShare to FacebookShare to Pinterest
Labels: Arielle Burgdorf, Liz Worth