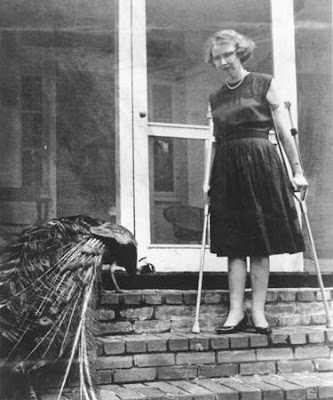 The first time I heard Flannery O’Connor’s name: my boyfriend mentioned a deliciously weird short story called “A Late Encounter with the Enemy.” The story felt like a collision. It left me shaky and sweaty, even as I laughed … and then peeked over my shoulder.


The second time: the same week my doctor guessed I had an autoimmune disease, and lupus made the shortlist. As I struggled with symptoms, medical tests, full-time studies, and a part-time job, a local woman published a newspaper story on her journey with lupus, reporting how her boyfriend, on hearing the term, moaned “Oh no, Flannery O’Connor.”


A private person, O’Connor preferred to avoid mention of her illness while discussing her work (Brad Gooch, Flannery: A Life of Flannery O’Connor 232). Still, the sickness threaded her life. Her short story “The Enduring Chill,” viewed through the prism not of her self-dramatizing character Asbury but O’Connor herself, is very much about sickness and identity: who, and what, is the Sick Self? Contradictions and absurdities weave together in an effect much like shot silk.


O’Connor suffered symptoms for years without the correct diagnosis, not, as is common with autoimmune patients, due to medical sloth, but to her mother, Regina. Lupus had killed Flannery’s father. When Flannery experienced her first major flare, Regina, knowing her desperately ill daughter feared lupus, insisted the doctors instead tell Flannery that she had rheumatoid arthritis (Gooch 215). It was a plausible lie; many symptoms of rheumatoid arthritis and lupus overlap. When she did receive the correct diagnosis, which she may well have suspected, Flannery also got the warning she might have five years to live. She moved back with her mother at Andalusia Farm and lasted another twelve.


O’Connor is nicknamed, in some flippance, perhaps, the Abbess of Andalusia. A devout Catholic who sometimes struggled with her faith and her intellectual pride — the child in “Temple of the Holy Ghost” is something of a self-portrait, as is Hulga in “Good Country People” —  O’Connor might disapprove. Still, the struggle remained. One odd episode: on her mother’s insistence, she made a difficult and doubtful voyage to Lourdes. When she returned to the US, predictably exhausted, her doctors X-rayed her decaying hip and discovered the joint had re-calcified (Gooch 306). No, not healed, not cured … yet something had happened. Reading this part of her biography, I wondered if I’d wandered into one of her short stories instead.


I struggle with O’Connor the person. A white woman in the still very segregated state of Georgia, a white woman benefiting from the underpaid labour of black Americans, O’Connor indulged in racist jokes in her private correspondence. Ostensibly she did this to irritate her vocally liberal friends, including Maryat Lee (Gooch 335). I expect it runs deeper. It seems that O’Connor neither accepted nor even considered that acting racist is being racist. Nuances: she supported Martin Luther King and the civil rights movement, and she showed, in the settings of her stories, how racism galls her characters’ lives, black and white. She refused to try to write from a black point of view, saying in an interview: “I don’t understand [black people] the way I do white people. I don’t feel capable of entering the mind of a Negro. In my stories they’re seen from the outside” (Gooch 336). Is this wisdom and sensitivity, a recognition that she, as someone who knew nothing of being black in the segregated US, could not presume to write from such a point of view, to appropriate a voice, or is it what her biographer Brad Gooch called “a type of artistic racism?” (Gooch 336) Atlanta priest Leonard Mayhew recalled that O’Connor “never said anything racist, but she was patronizing about blacks, treated them as children” (Gooch 334). In 1959, Maryat Lee asked the ailing Flannery O’Connor if she’d like a visit from James Baldwin. O’Connor explained she admired Baldwin’s writing, but: “No, I can’t see James Baldwin in Georgia. It would cause great trouble and disturbance and disunion. In New York it would be nice to meet him; here it would not. I observe the traditions of the society that feeds me — it’s only fair” (Gooch 335). I want to consider that last statement a reminder to Lee that O’Connor, too ill to work beyond a few hours each day on her fiction, lived in complete dependence on her racist mother. I suspect there’s more at work. And yet the only character in her 1960 novel The Violent Bear it Away to show true charity and give the horrible Mason Tarwater the Christian burial he requested is Buford Munson, a black man. In O’Connor’s view, Buford Munson may be the only character in that novel to do a Right Thing; the others all have tangled motives and personal agendas. In 1963, O’Connor wrote in a letter “I feel very good about those changes in the South that have been long overdue — the whole racial picture” (Gooch 337). The Civil Rights Act would be passed in 1964.


So what have we got? I see Flannery O’Connor as a white woman in a white supremacist patriarchal society, a racist who struggled with ideas of justice, mercy, and love as articles of faith. Her ideas evolved. Had she lived longer than age thirty-nine, she may have grown further past the taint which must be acknowledged when discussing her work. Perhaps the creator herself stands as tangly, as flawed, as capable of (grace-induced?) change, as her creations.


Why would I consider the flawed and mysterious (capital-M Mysteries here, I would argue) Flannery O’Connor some sort of literary mother? In part it’s the shared burden of autoimmune disease. That utterance would likely irritate her. Don’t worry, Flannery, I’m none too pleased about it myself. I look to O’Connor as a model of grace and endurance as I undergo the ordeal of my own aggressive autoimmune disease: discipline. I carve out every possible moment to focus on the work. I’ve no time to waste on such Writerly Things as blocks and doubts – though doubts assail me all the time – because I must devote most of my waking time to a second job that pays the bills and gives me access to a health plan, and because tomorrow I might be bedridden. Again.


Long sickness changes one, the way grace changes people in O’Connor’s fiction. She wrote to Cecil Dawkins on 9 December 1958:  “All human nature vigorously resists grace because grace changes us and the change is painful” (Letters of Flannery O’Connor: The Habit of Being, edited by Sally Fitzgerald 307). The easiest thing to say is Sick Michelle is very different from Healthy Michelle – except that’s not quite true. It took so long to get a proper diagnosis and treatment – decades – that I’m not sure if Healthy Michelle ever existed.


That sort of seismic change shows up in the lives of my characters. Sometimes it’s a huge socio-historical force; sometimes it’s illness. In my last novel, This Marlowe, where perhaps O’Connor’s influence on me shows the most, Kit comes down with a life-threatening pneumonia.The novel is set in 1593; those characters haven’t got much in the way of treatment. Twenty-first century medicine would note that Kit’s pneumonia is viral, not bacterial, which is the only reason he lives. The medical reasons are not important. The illness changes him, shoves him towards new modes of thought. This vigorous and physical male is left breathless and weak while surrounded by menace and threat and confined by circumstance. When he does regain some capacity for violence, that response no longer works. As events progress, Kit learns his beloved Tom is imprisoned and undergoing torture, all to pressure Kit into a decision. Kit concludes that to free Tom he must sacrifice himself. A sort of pilgrimage ensues; he walks a clear path to meet his death. He falters on the way – who wouldn’t – but this former divinity student, accused of atheism, knowing himself to be a descendant of thrice-denying Peter, follows the example of his Christ. He encounters some small signs along the way which might be taken as a nod from grace, reassurance from a benevolent and watchful God. Yet, in the final moment of facing violent death in a little room, when Kit looks up: “Nothing streamed in the firmament.” I’m conversing there with Marlowe himself and his John Faustus who screams “See, see where Christ’s blood streams in the firmament!” I’m also thinking of O’Connor and the sickroom ceiling in “The Enduring Chill.”


I mentioned doubts. I had many doubts about Kit’s death scene and its drawn-out preface, not least because of the established sadism of the character who carries out the murder, Robin Poley – and who suffers from my own autoimmune disease, ankylosing spondylitis, though his affliction goes unnamed – but also that the scene itself, the motivations, the playing-out, once stripped of characters’ self-delusions, are blatant and weird. I then struggled for subtlety; I may have face-planted into obscurity. I wanted to create what I call chased work, something I see in O’Connor and Marlowe: a sort of hammered relief of subverted expectation. In metalwork, chased work is the opposite of repoussage. One sinks the metal, pressing it to create grooves and channels. Physics: such change in metal requires some degree of violence, and the metal, of course, resists. Aesthetics: the depressions throws the heights into greater relief. Faith: grace changes the metal.


Flannery O’Connor once hosted her editor, Robert Giroux, at her mother’s house. Over breakfast, Regina O’Connor asked “Mister Giroux, can’t you get Flannery to write about nice people?” Giroux reports he almost burst out laughing, only to recognize Regina’s complete seriousness. (Gooch 317). If I had a dollar for every time I’ve heard that myself … Why must it be so dark? Why are your characters so prickly? Why can’t you write something easier to sell? Why can’t we have fluffy white clouds on the cover?


Why can’t you write about nice people?


As a writer, I’m not in O’Connor’s league. Still, Flannery O’Connor is one of my mothers. She shows me so much about illness, endurance, and fiction, and about the terrible faults and painful heights of the human condition, and she accomplishes this with stark, frightening, and often funny work where the reader must fend for herself. Flannery will not take you by the hand; she respects and trusts you. Besides, she’s too busy hammering metal.


As I hammer out my own stories, and, as my illness hammers me, I look for … what? Purpose? Thematic development? Coherent image patterns? Meaning?


I look for sunken metal — for the chased work — and there find, if only in fleeting light, grace and beauty: hope.

Michelle Butler Hallett writes fiction about violence, evil, love and grace. She’s the author of the novels This Marlowe, listed for the 2016 Dublin International Literary Award, deluded your sailors, Sky Waves, and Double-blind, and the short story collection The shadow side of grace. Her short stories are widely anthologized, including in the 2014 Best American Mystery Stories, edited by Laura Lippman.  Butler Hallett lives in St John’s.
Posted by the many gendered mothers at 8:00 AM