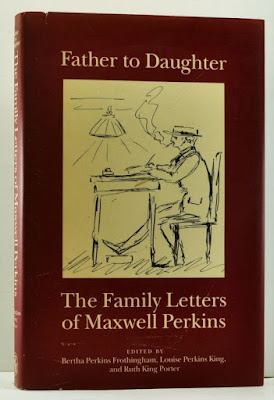 I was sitting by the gas-lit fireplace in my local library when a book on a table caught my eye.  It was the collected correspondence of Maxwell Perkins and Marjorie Rawlings.  As I read their letters I could hear their long-stilled voices speaking to each other, and to me, across the expanse of decades.  I tried to check out the book, but was told it was a reject from a book sale, and if I wanted it I would have to buy it, so I did.
At home, I looked up Maxwell Perkins on the Internet.  A link led me to rural Vermont and Perkins’ granddaughter, the novelist Ruth King Porter.  Ruth was giving away her novels, asking nothing in return but that readers post reviews on her website. I sent for Ruth’s books, and a correspondence began.  I was scheduled to visit Ruth in spring, when her mother’s dying began.  I was rescheduled to visit Ruth in autumn, when my mother’s dying began.  My mother was a chronic cancer patient whose condition turned terminal in the autumn of 2013.  Instantly I cancelled travel plans and let go of my already-purchased bus ticket.  As the local clinic stepped in to provide practical assistance, a friend with a car offered to take me on a day trip to Vermont.  Encouraged by my mother, I accepted the offer.  “We are two middle-aged women, both wearing glasses.”  I wrote to Ruth.  “My friend is a blonde with dark roots.  I still think of myself as brunette, but there is more salt than pepper in my hair, now.”  Ruth wrote that she would be waiting for me under the clock tower of Montpelier’s City Hall.  I knew what Ruth looked like from the photographs on her website.
My companion and I rode into Montpelier on a gloriously warm day at high noon.  I saw Ruth sitting on a bench under the clock tower, scribbling in a notebook.  Main Street was packed with tourists, and we couldn’t stop the car in front of City Hall.  We found a parking space down the street.  My friend waited in the car, while I ran down the block.  “Ruth?”  The woman on the bench looked up, and then leapt up.
Ruth was a pre-hippie Back-to-the-Lander, in her early seventies when I first met her.  At our first encounter she wore a white work shirt, faded blue jeans, slung a black money belt over her shoulder, and walked like someone who rides horses a lot.
“Where’s your friend?”  Ruth called, through the crowd of tourists blocking the sidewalk.
“She’s waiting in the car!”  I called back.  I led Ruth to the car and the friend in it.  Ruth led us both on a tour of the golden-domed state capital building.  “I hope we don’t run into my son.”  Ruth twinkled.  “He’d be embarrassed by the way I’m dressed.  My son Louis works as an aide to the governor.”  When the tour was over Ruth led the way, in her battered old car, out of Montpelier and higher into the Green Mountains, where another world awaited.
Ruth’s husband Bill and a second son, Robbie, rode on their tractors out of the woods to greet us on the porch of a rambling farmhouse.  Near the porch, three large dogs stiffened in alert.  On subsequent visits I would watch, ruefully, as Ellie and Flora danced attendance on the impervious top dog Chief.  During this initial encounter Ruth’s daughter Molly, an artist who lived, Thoreau-like, in a cabin she built with her hands, bounded up a hill to join us.  The open and friendly faces of Ruth’s family smiled at me kindly.  I’m sure they were aware of my situation, though no one referred to it.  Taut, lean, Alabama-born Bill wiped the grime off his hands and stepped forward to shake mine.  I felt as though I’d stepped into an illustration by Norman Rockwell.
As an early darkness fell my companion and I crossed back over the fence we call a border, returning to Montreal and my mother’s apartment.  “Hello sweetheart.”  My dying mother smiled tenderly.  “How did it go with the lady in Vermont?”
What could I say?  I felt guilty at having left her, even for a few hours.
I didn’t feel like relaying the details of an excursion to Vermont.

Six months later I returned to Montpelier by bus, and alone.  Once more, Ruth met me under the clock tower.   For a few days in May I curled under Ruth’s wing, sunning on her roof, sleeping in Max Perkins’ bed, waking to birdsong and skimming the staggering array of autographed out-of-print books dedicated by grateful authors to their engaged and caring editor.  “Grieving is hard work,” Ruth would greet me when, after a nap, I descended a steep staircase into her dark country kitchen.  Standing side by side in the verdant meadow which was her front yard, Ruth stated, as much in amazement as in sadness, “A year ago this time, both our mothers were alive.”
Ruth King Porter is an American blueblood whose antecedents hark back to a woman who held a door for George Washington.  I am the Canadian-born daughter of refugees.  My mother, a woman who survived three invasions and the Warsaw Ghetto, later in life became prominent in Holocaust education.  Ruth and her husband Bill were fascinated by my family history, a history which many find repellent.  Ruth did for me what I had done for my mother; she listened and encouraged me to tell my mother’s story.  When I read a book Ruth recommended, I realized she had a deeper understanding of my background than I thought possible.
Six months after my first extended visit, I was back on the farm.  Ruth and Bill acknowledged what would’ve been my mother’s birthday by inserting and lighting large candles into holes carved in a spectacularly tangled chandelier made entirely of logs.  As we consumed hot squash and a pot full of peas grown in Ruth’s garden, cold autumn rain and wind lashed the last leaves off a forest full of trees outside the wall-size picture window.  Inside, as we ate, the lit log chandelier shone, the tree bark-shaded lamps glowed, and the wood stove burned.
Several weeks later, nearing my birthday, which was a big one, by post I received from Ruth a warm, multi-coloured scarf.  Inspired by the gift and the woman who gave it, the next day I bought an attractive hat to wear with the scarf.
I have been back to Ruth and Bill’s farm several times, since.  In between visits Ruth does for me what her grandfather did for Ernest Hemingway, F. Scott Fitzgerald, Thomas Wolfe—and Marjorie Rawlings; she writes to me and elicits writing from me, reading and critiquing my material, encouraging, cajoling, indicating where and when she believes I have veered off-track, and gently nudging me back.  Clutching the psychic lifeline tossed to me by the descendant of a legendary literary editor, I lived and worked alone and in growing peace in my suburban Montreal apartment, producing a memoir of my mother.

S. Nadja Zajdman is a Canadian author.  Her short stories and non-fiction pieces have been featured in newspapers, magazines, literary journals and anthologies across North America, in the U.K., Australia and New Zealand. In 2012 Nadja published the related short story collection Bent Branches, which spans four continents and seventy years in the life of a family.  Recently Nadja completed work on a second short story collection, as well as a memoir of her mother, the noted Holocaust activist and educator Renata Skotnicka-Zajdman, who passed away near the end of 2013.