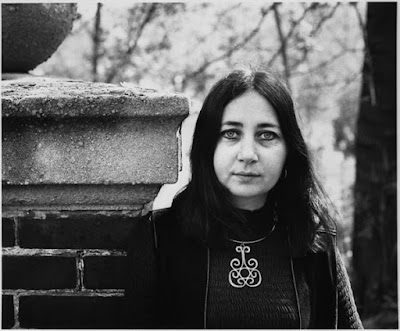 The first thing I remember is how she looked out at me from the photo on the cover of Rosemary Sullivan’s biography, Shadow Maker:  The Life of Gwendolyn MacEwen. She looked like a Toronto poet from the 1960s, all bohemian and lit up, all shadow and light, all mysterious and mystical, with her eyes rimmed dramatically in black kohl. She looked a bit haunted, too, as if she had a secret that you wanted to beg her to share with you.  “Dark Pines Under Water,” the first poem of hers I ever read and fell in love with, is part of that ‘secret,’ I think. 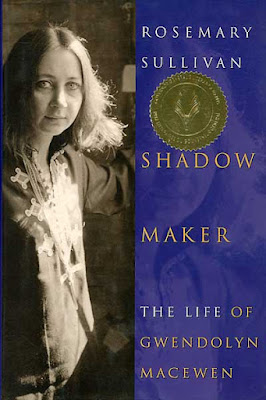 What draws me to her (and yes, I know I speak as if she still lives) is that she seems a creative and poetic enigma to me. I’ve studied her work, read the Sullivan biography, and have read and seen Linda Griffith’s play, Alien Creature: A Visitation from Gwendolyn MacEwen.  I studied her work first, pouring over her poems, drawn to the depth of her imagery, rich symbolism, and metaphor. Here was a person who wasn’t afraid to travel the world, live sensuously as a woman and poet, falling in and out of lust and love, and breaking her heart thoroughly in the process. But she seemed fearless to me, in her work, and later, in what I read about her life. I have longed to be fearless for most of my life, but often struggle to be brave in what others might think are the simplest of ways.

In MacEwen, I could see a spirit stuck in a body, a bright spark, creative and tormented by both her gift and her intelligence. It must have seemed, I think, like both a blessing and a curse to her. So many people have written about how creativity and madness, or light and darkness, have courted one another for centuries in art and literature. You only need to think of the ghosts of Virginia Woolf, Anne Sexton, and Sylvia Plath, along with those who might be considered to have been indirectly damaged, those women who chronically struggled with addiction, mental illness, and difficult lives. They could include the likes of Dorothy Parker, Gwendolyn MacEwen, and Elizabeth Bishop. There are others, of course, but these are ones whose work has influenced me as a woman writer.

I have never been an alcoholic, but I have seen the results of the destructive ripple of alcoholism in my family, and I have dealt with depression, so I can understand how a writer can get lost in her own mind, searching for a doorway out and maybe never finding one. Minds are complex places within which to work and live, and writers spend a lot of time in cerebral, introverted, and solitary landscapes. I imagine that, if you were to add addiction to that, it could be a very scary place indeed.

In “Dark Pines Under Water,” published in her Governor General’s Award-winning collection, The Shadow-Maker, MacEwen seems to write, on the surface, in simple ways, of the essence of Canada. This was during the time when a number of Canadian writers were questioning identity and what it meant to ‘be Canadian.’ Margaret Atwood’s Survival:  A Thematic Guide to Canadian Literature (1972), as well as her book of poems, The Journals of Susanna Moodie (1970) come quickly to mind, of course. (MacEwen’s poem would pair nicely, too, with Atwood’s stunning poem, “This Is a Photograph of Me,” if one were ever to play matchmaker for poems.)

The thing that transfixes me about “Dark Pines Under Water” is that it’s so compact, just thirteen lines in length, and a fine example of what a good poem is all about. The imagery is sharp, the lines are tight, and the metaphor is strong. It’s the kind of poem every poet would love to write just once in their lifetime. She begins with these iconic lines: “This land like a mirror turns you inward/And you become a forest in a furtive lake.” She writes of “dark pines of your mind” and of how you “dream in the green of your time.”  What begins as a seemingly simple rendering of a landscape that seems archetypally Canadian soon deepens, though. The speaker addresses herself: “Explorer, you tell yourself, this is not what you came for. . .You had meant to move with a kind of largeness,/You had planned a heavy grace, an anguished dream.” The landscape gets darker and more metaphorical.

It reminds me of swimming in Georgian Bay, off Killarney’s little islands. There’s a stunning sort of Group of Seven landscape there, but when you canoe the mouth of the North Channel, or you swim in the water, you quickly see that the depth is greater, and darker, than the surface beauty would lead you to believe.  A wind warning can change the weather quickly, so that what once seemed like calm water is soon quite dangerous.

The dark pines of that first ‘lighter’ stanza reappear in the last one. They “dip deeper,” so that the speaker sinks into an “elementary world,” a place where there is a story that needs to be told, something to be revealed. What began as a poem about surfaces soon becomes one about depth. I love this about her work. It’s complex and rich, always challenging and thought provoking.

MacEwen haunts me. She died in 1987, at the too young age of 46. I always think of what else she would have written had she lived. She was prolific and gifted. That her mind pulled her under, in so many ways, is the saddest part. But it also makes me want to be a better poet, a more wise and courageous explorer—less fearful and more fearless. When I think of her, when I see her face in my mind’s eye, and read her work out loud, I’m thankful it’s enough that this grand shadow-maker poet came before me, and that I know parts of her now, through her work.

Kim Fahner lives and writes in Sudbury, Ontario. She is the fourth poet laureate of the City of Greater Sudbury, and is the first woman to be appointed to the role.  Kim has published three volumes of poetry, and her fourth, Some Other Sky, is being published in Fall 2017 by Black Moss Press in Windsor. She has also had two of her plays, Ghost of a Chance and Sparrows Over Slag, workshopped at the Sudbury Theatre Centre. Kim has just finished her first novel, a historical piece called The Donoghue Girl, which is set in the northern mining town of Creighton, a place that once existed just outside of Sudbury. She is a member of the League of Canadian Poets, the Writers’ Union of Canada, and PEN Canada. Kim blogs at kimfahner.wordpress.com at The Republic of Poetry.
Posted by the many gendered mothers at 8:00 AM