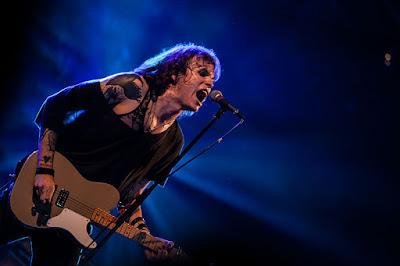 I spent my adolescence trying to prove my love for punk to the boys who thought it wasn’t for me. It started when I was twelve and wore a Ramones t-shirt to school. I bet she can’t even name one song! Already, I was full of hurt and fear and anger; bullied ceaselessly since kindergarten, now dealing with the loss of a close relative and the constant, looming question of my sexuality. Like so many outcasts before me, I found solace in the anger and frustration of rock music, in all its many forms.

Laura Jane Grace, frontwoman of the punk band Against Me!, came out to the world in a 2012 Rolling Stone story titled, “The Secret Life of Transgender Rocker Tom Gabel.” The article was cringey; it used male pronouns and phrases like “becoming a woman.” Still, I felt a huge amount of pride in her, this person whose art I had adored for the better part of a decade, that she could be so brave. At that point, I still didn’t understand my own identity, but I did understand that Against Me!’s music had always been more for me than for the boys around the campfire.

I discovered Against Me! when I was fifteen, sitting at the computer with my high school boyfriend, illegally downloading individual songs from LimeWire. I had an instant connection to the music, its blend of punk and folk, my two most beloved genres. At that time, I was doing my best to be “not like other girls;” still pretty and feminine, with long hair, dresses, and makeup, but supposedly “cooler” than girls who cared about pop music and wore pink. I could not have told you why at the time, but Against Me!’s rejection of all of society’s most violently enforced norms resonated with me on a deep, queer, emotional level.

I secretly loved a much more diverse array of musicians: Aqua, Britney Spears, Macy Gray. My mom’s Jim Croce and John Denver CDs. Still, I knew that being open about my predilection for the Spice Girls/Backstreet Boys would ruin my punk credibility, so I kept it to myself. Rather than just sit back and enjoy bands like Pink Floyd, Led Zeppelin, Mastodon, Husker Du, and The Clash, I had to learn everything about them; every member’s name, every detail of every concert DVD; every record they had ever released. I had to prove myself to the boys who would question me; for girls, casual enjoyment of these bands was not allowed. Even though rock/punk/metal were supposedly a place where gender norms were not so rigidly enforced (see: men in makeup, long hair, tight pants), it seemed as if femininity was being co-opted, not uplifted. No matter how much I knew, the unspoken rule was still there: this music was for the boys who sang it loudly and drunkenly at parties, not for me.

In 2009, my second year of university, I found a group of female friends who were Against Me! fans. I saw the band live for the first time with these girls; we stood at the front, and I enjoyed using my tall, long-armed body to protect them from the mosh-pitters all around us. I continued to struggle with my gender/sexuality, and to relate more and more to Against Me!’s lyrics, which had been quietly influencing my writing for years. They showed me how to be political, and taught me how to think critically about the media I was consuming. They also showed me that there is great beauty in weirdness, and that the oddest things are often the most interesting.

The writing on Grace’s two most recent Against Me! records are overtly, unapologetically queer. She has always written from a place of intense vulnerability, and is way more punk than any punk who ever called her a sellout. That’s healing, for people like me.

Joelle Barron lives and works on the traditional territory of the Anishinaabe of Treaty Three. Their work has been published in The Fiddlehead, The New Quarterly, Plenitude Magazine, SAD Magazine, and others. Joelle is a doula, and coordinator of an LGBT2S youth group. Their book, Ritual Lights, is forthcoming with Icehouse Press in Spring 2018.