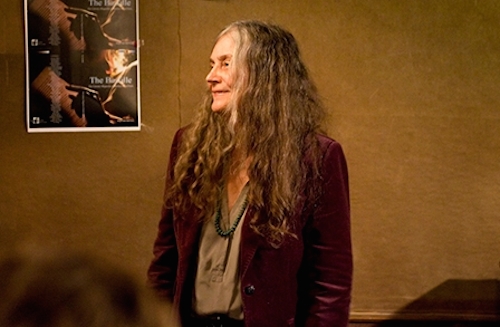 I met Alice Notley by accident. I’d applied to the Atlantic Center for the Arts artist residency but got the year wrong. When I looked again, and saw I’d be working with Alice Notley, I froze. Alice. Notley. Her work’s ambition and execution terrified me. She didn’t write poems; she wrote epics. I’d only read The Descent of Alette and remembered it as a breathless journey into hell. Its phrases divided by quotation marks to simulate the staccato rhythm of being on a train. The main character, Alette, had to confront The Tyrant to heal the world. The Tyrant says terrifying things like: “Soulfulness…cannot hold power.” But, Alice did. Her most referenced quote about making poetry is: “The first rule of poetry is honesty; the second rule is fuck you.” She was the kind of uncompromising artist I wanted to be.

When I met her, I had been cooking for people going through chemotherapy for a few years. More than my poetry, even, I think Alice picked me because she wanted to know about my experience cooking for the dying. I wrote poems, in those days, about trying to give my clients gastronomic delight at the end of their lives. I made them favorite childhood dishes or desserts. I was 33. My mother had been sick for years, but I still didn’t know much about death. As I stood in line for dinner one of the first nights at the residency, Alice asked me, “Do you really think dying people can enjoy pleasure?” I hoped so but had no real idea.

On Alice’s shoulder is the tattoo of an owl— “my guide through the underworld.” Her brother had served in the Vietnam war and killed himself. Her stepdaughter died in a car accident. Both of her husbands, first, Ted Berrigan of liver disease, then, Douglas Oliver, of cancer, had died. Ted, leaving her widowed with two young sons. Douglas, leaving her alone in France. In 2013, six years after meeting Alice, my daughter was born, and I watched both my mother and brother die within a month of each other. Alice’s work suddenly reflected the shape of my life.

“In the States” she wrote:


At night the states
And the world not that tired
of everyone
Maybe. Honey, I think that to
say is in
light. Or whoever. We will
never
replace you. We will never re-
place You…

I was right there with her. Sleep deprivation from nursing my daughter at all hours and helplessness from loss blanketed my mind. My body belonged to my daughter. My mind was a swirl of grieving fragments. I wrote a line about my brother’s body wasting away from ALS. Another about my mother forgetting who I was in her final weeks. A third about how the light touched my infant’s cheek in the morning. There was no cohesion. I could complete nothing. I e-mailed Alice. She wasn’t going to give me some hackneyed advice. That wasn’t her style. She told me that she’d never had a period of her life when she didn’t write. Through everything, writing had kept her alive.

One line. Two lines. I was still a poet, though I didn’t recognize myself. Grief and exhaustion were changing me, but my art was there, always. Alice gave me permission to be a maelstrom one minute, gooey puddle the next. In her poem “Love,” she writes:


how stupid can you get. they think they’re their brains


The cancer is there… There is a reference to

the figure of love, my love, and the color brown, which in my symbolism

of color relates to reds spectrum and the soul, and in his to kindness

I have the right to include this.

Ive been left with nothing and thats where it is…

In 2015, Alice won the Ruth Lilly award. There is a picture of her they published—gray hair down to her waist. Full wisdom witch. Pick up any of her books and open it. You’ll see the universe.

I’ll never forget watching her read work at the Orlando library during the residency. Her voice was nervous and fast. Bush was at the end of his second term. The war in Iraq dragged on and on. She read from Alma, or The Dead Women, the poem “Beloved Earth Restrain Them”:


i bind Bush and Cheney and Rumsfeld, and their tongues and words and deeds; if they are planning war for today let it be in vain. Beloved Earth restrain them, and make them powerless and useless… i can’t remember what happened…because he died that year…at every description of physical invasion of another person, whether surgical or criminal or military, he cried out in protest and empathy—because he too has been invaded. wants no one else to suffer so.

Her husband’s dying body was the world. People openly sobbed in the stacks. In her essay, “Voice,” Alice says: “…a poetic voice should have…fearlessness or courage, the voice must be clear about itself in some way, believe itself, and be consistently unafraid.” That day all who witnessed her reading felt emboldened. Me, most of all. She threw out shimmering waves of possibility and made me braver. She’d laugh that I wrote that. She would come down from the pedestal I just built and ask me about my own life, my daughter, my writing. I’d want to tell her she changed my art, my life. To bow. Thank her. She’d scoff and ask me to pass the damn wine.

Claudia F. Saleeby Savage is an Arab American poet, essayist and teacher and part of the performance duo Thick In The Throat Honey. Her essays, interviews, and collaborative work appear in print and onstage often explore the theme of diaspora. Her latest collection is Bruising Continents (Spuyten Duyvil) with recent work in BOMB, Denver Quarterly, Columbia, Nimrod, Water-Stone Review, and Anomaly (the interview series “Witness the Hour: Arab American Poets Across the Diaspora"). Reductions, about motherhood and ephemerality, with visual artist Jacklyn Brickman, will be shown in 2020. She is a Black Earth Institute fellow and is working on a book about Syria, jazz improvisation, and freedom.