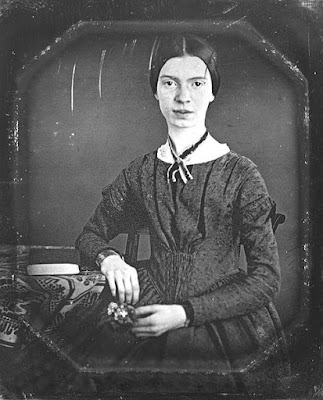 Trying to write about female writers who have influenced me induces a strange sense of guilt. There have been, of course, real, living women, such as poets Sue Nevill, Katerina Fretwell and, especially, Susan McCaslin, who recognized that certain cadence in my head space from the get-go and, when I was in my twenties, edited my work, attended my readings and otherwise encouraged me with the straightforward praise I needed to sip at the time. And there are a wealth of others I have read over the years that I have drawn immense sources of form, agony, eroticism and sound from (Gluck to Olds to Graham). But, if you ask me to speak to my main influences I will instantly name male ones, particularly Robinson Jeffers, during the early days, and John Ashbery later on. However, if I think as far back as I can into my literary life, before I even knew that's what it would become, I was reading Emily Dickinson.

When I was three years old, I was gifted with a Golden Treasury of Verse and quickly picked my favorites to have recited to me at night, then, before I even entered play school, to sing to myself as often as possible. One of these was indubitably Dickinson's "I'm Nobody! Who are you?" But did I know the author of these lines about the "dreariness" of being "Somebody" was a woman? Nay, I thought she was a frog, the illustration on the page being of a rather large, warty amphibian to emphasize the line "How public - like a Frog -".

Sometime during my teens, I re-encountered Dickinson (finally realizing she was a woman), as I was turning from writing stories to composing maudlin poems and metal songs, recognizing a fellow denizen of the darkness in her, found in lines such as "T'was like a Maelstrom, with a notch,/that nearer every Day,/kept narrowing its boiling Wheel/Until the Agony" and "A narrow Fellow in the Grass/Occasionally rides," the latter of which I made a point to memorize, particularly for its tremulous close, "And Zero at the Bone." Although from a vastly differing era, and purportedly a recluse, rather than a partier, this was a undoubtedly a hardcore poet. My adolescent soul rejoiced in an ally.

But it wasn't until I lost my young spouse, in my thirties, that Dickinson began to embody for me a certain poetic intimacy that felt like one woman speaking to another woman, perhaps not quite reassuringly, but knowingly, without doubt that there will be suffering, but there will also be strength. Lines like:
"I felt a Funeral in my Brain,"  "After great pain, a formal feeling comes -" and stanzas such as "I measure every Grief I meet/with narrow, probing Eyes/I wonder if it weighs like Mine/or has an Easier size," and "The Soul has Bandaged moments/when too appalled to stir/she feels some ghastly Fright come up/And stop to look at her -" felt like an encompassing of mourning, unyielding and terrifying and yet also with a certain soothing measure and definite temporality. Very few people, even writers, said much that made any sense or offered real consolation at the time. Emily Dickinson - rare gift - did.


Catherine Owen is the author of 13 collections of poetry and prose. Her latest poetry book is Dear Ghost, (Buckrider Books, 2017), nominated for the Pat Lowther Award, and her upcoming memoir anthology, featuring 25 Canadian writers on mourning, is Locations of Grief: An Emotional Geography (Wolsak & Wynn, 2020). She lives in a 1905 home called Delilah in the oldest neighbourhood in Edmonton, AB.
Posted by the many gendered mothers at 8:00 AM