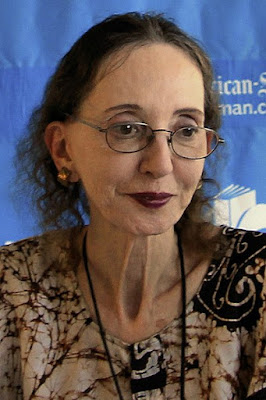 Jacqueline Doyle on her Medusan Muses

It’s President’s Day 2018, more than a year into the worst presidency in U.S. history, an undrained swamp that becomes murkier and more putrid every day. My grown son has President’s Day off and is getting ready for a 15-mile bike ride, running in and out of the kitchen, screen door banging. Though my husband and I teach at a state university, we don’t have the day off. He’s been on campus since 10am. I have some time before I need to shower and dress and eat, probably in a rush, and leave for my 5pm office hour. I teach a night class on Mondays, a schedule I like, since I have all day for my own writing. Today I finished a final draft of my flash fiction “Medusa Reflects” and sent it out. Tonight I’m teaching Joyce Carol Oates’ Black Water, a breathtaking, horrifying novella loosely modeled on Chappaquidick, something none of these students will know about, at least not the twenty-somethings. Oates was inspired to write Black Water not in 1969, after Mary Jo Kopechne drowned in Ted Kennedy’s car and he got off with a suspended sentence for leaving the scene of an accident, but in 1991, when Kennedy’s nephew got off on a rape charge. I’m less interested in the Kennedys than the depiction of gender and power in the novel, a dramatization of the last two hours of a young woman’s life as she waits in vain for The Senator to rescue her, trapped after his car careened off the road and sank into the black water, “evil muck-water, thick, viscous, tasting of sewage, gasoline, oil.”

Joyce Carol Oates, one of my literary foremothers. When I was tempted to apologize last fall for how dark my new flash fiction chapbook The Missing Girl is, I thought of her 1981 New York Times piece “Why Is Your Writing So Violent?” The question, she said, is “always insulting,” “always sexist.” “These things do not need to be contrived,” she said elsewhere. “This is America.” Jayne Anne Phillips, another foremother, whose Black Tickets made a lasting impression when I was in grad school years ago. Flash like “What It Takes to Keep a Young Girl Alive,” where “they carried a [dead] girl out of the barracks wrapped in an army blanket,” stories like “Gemcrack,” narrated by a serial killer of young women. Sandra Cisneros, who wrote flash vignettes about women and girls trapped by circumstance, and stories like “Woman Hollering Creek,” about women who broke out. Toni Morrison, who from The Bluest Eye to the present has never shied from experiment, never allowed others to determine what characters are marginal and what characters aren’t, what subjects too dark. Who has told truths about Black women and history that haven’t been told before. “Quiet as it’s kept.”

I don’t think I would have written The Missing Girl without them.

And another mentor I only just recalled as I retold Medusa’s story of rape and betrayal and reclaimed power: Hélène Cixous, whose essay “The Laugh of the Medusa” I looked up again when I was writing my flash, prompting a flood of memories only hinted at in my covert allusion in the penultimate line of my tale.

Cixous was part of a triple-headed Hydra of French feminists who had become popular by the time I was in grad school in the eighties. Like many other U.S. feminists, I read her explosive manifesto in translation in the popular 1980 anthology, New French Feminisms, which must be buried in my bookshelves somewhere, one of those books I can visualize vividly (a white paperback with blue lettering and two orange stripes), though I haven’t looked at it in years.

I was a scholar completing a Ph.D. in English, which I’d interrupted after my divorce, and returned to only after much soul-searching several years later. I was working on Poe’s dark tales and his varied resurrections among twentieth-century (mostly male) modernists. (I later quoted Cixous in an article on Poe’s “Berenice.”) It wasn’t until I had a tenure-track teaching job that I’d begin to write about contemporary women writers. It wasn’t until I’d been teaching and writing scholarly articles for twenty years that I’d begin to write my own stories.

I should have heeded my strong attraction to Cixous at the time. She recuperated Medusa and Freud’s Dora (another figure whose story I’ve retold). She undid binaries, spoke in a rhapsodic rush of metaphors, insisted on the freedom to write. “I shall speak about women’s writing,” she opens, “about what it will do. Woman must write her self: must write about women and bring women to writing, from which they have been driven away as violently as from their bodies.” She didn’t begin to write until she was 27, she says, so “I know why you haven’t written,” or have written only in secret, or criticized yourself so harshly, repressed your imagination. “Write! Writing is for you, you are for you; your body is yours, take it.”

I was in my fifties when I began to write. I’d long since forgotten “The Laugh of the Medusa,” which surely helped lay the groundwork for my creativity. Is it a coincidence that my father had just died?

I lather up in the shower, my skin slick and slippery, and reflect that I appreciate my body more now than I did ten years ago, or twenty. I can hardly believe I’m sixty-six. Yoga makes me more aware of my breathing and what my body wants to tell me. Despite the aches and pains of aging, and an immobilizing bout with sciatica ten years ago, I’ve been lucky so far. My body continues to serve me well. And my voice is stronger than it’s ever been.

I towel my hair roughly in front of the steamy mirror and when I take the towel away my hair stands out in spikes all over my head. Medusa! It makes me laugh.

Jacqueline Doyle lives in the San Francisco Bay Area, where she teaches creative writing and women’s literature at California State University East Bay. Her award-winning flash fiction chapbook The Missing Girl was published last fall by Black Lawrence Press, and she has published creative nonfiction and flash fiction in numerous literary journals. Find her online at www.jacquelinedoyle.com and on twitter @doylejacq.