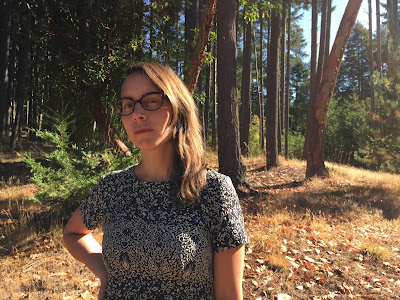 When I was pregnant with my second child and doing research on childbirth and motherhood for my third book, Brecken would send me reading recommendations. Not the what-to-expect-when-you’re-expecting type, but the dark, seedy, underbelly confessions of mothers. A Life’s Work by Rachel Cusk. Drunk Mom by Jowita Bydlowska. Ongoingingness: The End of a Diary by Sarah Manguso. Susan Holbrook’s poem Nursery is still the most accurate and telling description of a breastfeeding relationship I have ever read. Brenda Shaughnessy’s Our Andromeda buried me alive with its ferociousness. I devoured them all, starving for any material that would depict the darkness of motherhood in equal measure to the light.

After my second daughter was born, Brecken sent me podcast links. I listened to every episode of The Longest Shortest Time and The One in a Million Baby with my colicky infant strapped to my chest. Those podcast episodes were my lifelines. Queer stories that resisted the stereotypes of motherhood and parenting. Transgender dads giving birth and breastfeeding their babies. Butch moms searching for appropriately stylish maternity clothing. Birth injuries. Sex after childbirth for all of us. I’d walk and listen for hours each day. Every time I waited to cross an intersection my daughter would scream. I couldn’t write during this time, I could barely think. I had to be moving, always moving. I’d disassociate. Mothering while thinking about my next move.

B:         I’m sitting here in genetics and
the couple beside me are
cooing at each other and he’s
rubbing her belly, which is still
flat. Ugh. I hate this sentimental
shit

Now his butt is half in my chair
because he’s putting his ear to
her stomach.

A:         He won’t be cooing all over her
when she shits herself in the
delivery room. #firsttimeparents

Brecken is a mother to one son and one fetus. Her book, Broom Broom, is about a mother/daughter relationship. It’s about illness and bodies, bathtubs and hygiene, and the desire to purify internal damage. It’s a dark story of motherhood, of abuse, trauma and self-harm. It is Brecken’s bravery that is most apparent in the book. Unapologetic confessions of familial intimacy reveal a mélange of dichotomies - clean verses unclean bodies, clean verses unclean psyches. I return to Broom Broom frequently, for its brutal honesty, its hostile and grotesque language, its nebulous humour. Most of all, I re-read the book for its haunting contaminated speaker, both mesmeric and relatable in her anxiety and pain.

One week we compare ‘new lows’ in mothering, pregnancy and bodily functions. When changing my toddler I discover a soggy rice cracker wedged inside her diaper. Without hesitation I pop it in my mouth and proceed to clean her up. It takes about five minutes before it fully computes that I have just pulled a cracker from my kid’s diaper and ate it. Rock bottom.

In turn, Brecken sends me a message. She is nauseated on transit and has to exit several stops early to avoid throwing up on the bus. She retches into her hands while dashing across a slushy street. She then runs several blocks, reeking of vomit, to make it to her son’s daycare in time to pick him up.

When Brecken edited my second book, Buoyancy Control, I thought we’d share one or two phone calls to touch base about her written feedback. Instead, our first conversation morphed into a lengthy excavation of my work. Her editorial approach was to climb inside my book, zip the pages around her and spend several weeks roaming around the ego of the manuscript. She caught the usual grammatical errors and suggested alternative word choices and line breaks, but more than that, she situated herself inside the flesh of each individual poem, raising crucial questions of each piece. Instead of a few short phone calls, we maintained an ongoing dialogue that lasted several months. The book that evolved from that dialogue was a collaboration. Together, we assembled a world.

A:         I’m at SFU waiting to see Maggie
Nelson talk about The Argonauts
(MAGGIE NELSON AHHHH) and I’m
recognizing, yet again, how
mothering has basically castrated my
social skills. I see all these people I
know and I can’t handle the idea of
talking to any of them. Why? They’re
perfectly nice people. I like them all
and we have things in common
(MAGGIE NELSON) but I just can’t
imagine attempting a smart witty
conversation when I have sweaty
armpits and misshapen boobs from
my stupid nursing bra that no longer
fits. I don’t know how to talk to
people in grown up spaces, without
the ongoing distraction that is my
children. I am equal parts WAY too
giddy to be out in the world after 6p.m.
and terrified that I will drool my sleep
deprived, adult-hungry, needy self all
over the next person who says hi to me.
Send reinforcements.

I finished the edits for my second book with my laptop propped open on the kitchen counter. I lapped the kitchen to keep the colicky baby asleep, pausing at my computer to change a line break or cut a word. I mothered each edit. Unconditional love is assumed to be inherent in mothering. Except we do have conditions. Maintaining friendships, writing books and collaborating together in darkness. We have to or we drown.

While searching for a motherhood that makes sense, my ‘disaster’ of a friend mothers me. She is careful with her words so as not to discourage me. She questions my choices with compassion. She joins me in the rubble, the wreckage of motherhood and writing. I swell. I am full of light and darkness, of equal measure and necessity. 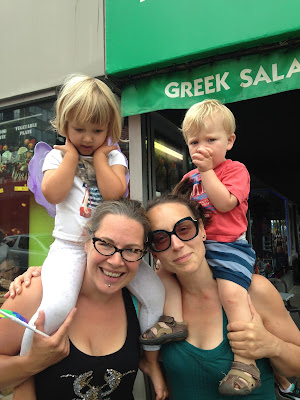 Adrienne Gruber is the author of the poetry collection This is the Nightmare (2008; shortlisted for the Robert Kroetsch Award for Innovative Poetry) and three chapbooks: Intertidal Zones (2014), Mimic (2012; winner of a bpNichol Chapbook Award), and Everything Water (2011). Her work has appeared in numerous literary magazines, including Grain, Event, Arc Poetry Magazine, Poetry is Dead, and Plentitude. She has been a finalist for the CBC Literary Awards in poetry, Descant’s Winston Collins Best Canadian Poem Contest, and twice for Arc’s Poem of the Year Contest. Her poem “Gestational Trail” was awarded first prize in The Antigonish Review’s Great Blue Heron Poetry Contest in 2015. Gruber lives in Vancouver with her partner Dennis and their two daughters. Her new book, Buoyancy Control, was published by BookThug in the spring of 2016. Her third poetry collection will be published by BookThug in the Spring of 2018. Learn more at http://adriennegruber.wordpress.com.
Posted by the many gendered mothers at 8:00 AM