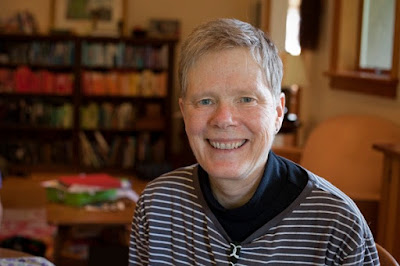 When I talk about Betsy Warland as a poetrymother I am talking about how Betsy taught me to listen. She is an exquisite listener. In writing, Betsy tunes in to what the text needs and thinks about how to create space for that. She demonstrates how to attend to the body of work on the page while taking care with the body of the community. Everything is connected, everything is in flux. In following her holistic model of how to write, how to be a writer, how to live a life of writing, I try to listen, too.

I met Betsy in 2006 when I called The Writer’s Studio at Simon Fraser University (TWS) for info. Betsy, the founder and director from 2001 to 2012, had created a community at TWS that was irresistible: it gave new writers training on and off the page for the panoramic situation of being a writer while inculcating the importance of mutual support.

And then I read Betsy’s work. Bloodroot: Tracing the Untelling of Motherloss (Second Story Press, 2000) zoinked me awake with what a memoir could be. The text shifts and wiggles across the page. In it she writes things that are unsayable, with tenderness even when she is angry, heartbroken. The book is intimate, and respectful and devastating. It’s one of 12 books she created over a long and ongoing feminist, queer, creative life of plunging in. Critical attention has been a slow boil but while that has been accumulating Betsy has been in constant motion. Aside from her dozens of collaborations and projects she has nourished at least eight different alternative writing instruction programs, including Thursdays Writing Collective, which I founded in 2008.

Through conversations, classes, margin comments, coffee dates and family dinners she taught me a problem should be written into rather than ignored. This piece of advice – to write into the problem – is one I have engrained in my writing reflex. I repeat it to any friend who is stuck or frustrated. In essence, Betsy is talking about using a judo flip on the text so its own momentum takes it to the mat. Use the problem against itself – if the text is too dense make it denser, write about the density itself, or reverse: cut the words into confetti. If the character is stuck, tackle that head on via an impossible impasse or metaphor. Turning the writing in upon itself turns writing into effortless effort, where creativity flows.

That tactic was at work when Betsy grappled with telling a family story of abuse in The Bat Had Blue Eyes (Women's Press, 1993). She turned that crux into a mechanism for sending the words slanting and sliding across the page, destabilizing the narrative centre and its traditional alignment.

This ability to score the page, a term Betsy uses to describe “how we shape or place a line or sentence on the page” (Breathing the Page, Cormorant Books, 2010) comes, perhaps, from Betsy’s visual arts training, another hint at the borderlessness of her creativity. She attended to an early draft of my book of poems, serpentine loop, with a suggestion I thin the blocks of text on the page, change the pace, allow instead of compress. In Breathing the Page she writes explicitly about leaving the page free, rolling a word or two in abundant space. Her page is a field where she mixes genres, elides forms so the subject matter slips into its own shape.

When Betsy wrote Oscar of Between (Caitlin Press, 2016), a memoir of betweeness of gender/genre, she didn’t imagine it would find an easy home with a publisher. She knew the memoir (shot through with a fictive element) needed community and conversation so she allowed needs to dictate form. She made a permeable and conversational online salon for Oscar of Between, where she engaged guest writers to respond to segments of the text and asked readers to connect, too. She brought me inside, literally called me by name into the text, and then invited me into the Salon, too. I was lucky to witness its gestation and think about these ideas of moveableness as I need them in my own work.

Reading her books and seeing how they take up what space they need confirmed my troubles with an early non-fiction book-length project while it illuminated possibilities. A year after I finished the non-fiction program Betsy called me urging – almost insisting- I work with Rachel Rose, the new TWS poetry mentor. Though I hadn’t written a poem before, I was curious and trusted Betsy. Her insight about my writing had always been accurate –she’s the fairy godmother I trust even if I don’t recognize the logic yet. Sure enough, Rachel became another crucial poetrymotherfriend and poetry became home base for me.

As a poetrymother Betsy provides these vital connections, these considerations based on her care for writing. I listen to Betsy when she talks about self-care and word-care – how to best support the thoughts’ transition to the document. Aren’t the two (self- and word- care) intertwined? I witness Betsy let herself and her words be just as they must, without facile and restrictive categorization. This care, this acceptance.

This slow down and take care of what the writing needs even when the ideas are coming fast.

The pinkie-length pencil she stashes behind her ear when it isn’t tucked into a palm-sized notebook. The lesson to be ready to catch the words on the page and to let them grow into every form they choose.

Elee Kraljii Gardiner is the author of the book of poems serpentine loop (Anvil Press, 2016) now in a second edition. She is the co-editor with John Asfour of V6A: Writing from Vancouver’s Downtown Eastside (Arsenal Pulp Press, 2012), which was shortlisted for the 2012 City of Vancouver Book Award. Elee founded Thursdays Writing Collective, a non-profit organization of more than 150 writers in Vancouver and she is the editor and publisher of eight anthologies. Her second book of poems is forthcoming in 2018. www.eleekg.com