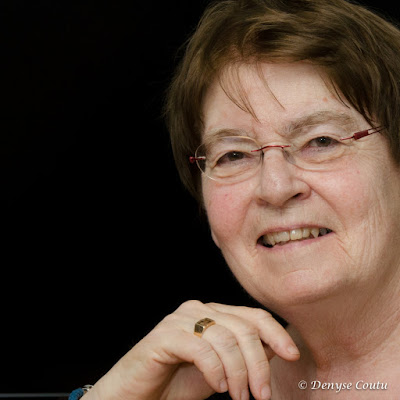 I want to see in fact the form of women organizing in the trajectory of the species.
-          Nicole Brossard These Our Mothers 1983.

I first met Nicole Brossard in an airport departure lounge in Frankfurt in 1988. We were en route to a feminist conference on writing and language in Dubrovnik. As I recall, Brossard gave a talk on the power of the word “lesbian” and I argued, via deconstruction, for a post-gender, post-feminist theory (Rudy Dorscht 1988). I was poststructuralist and straight.  She was feminist and lesbian. I was drawn to her and terrified.

In 1988, I was married to a man. I had a PhD. And a baby daughter. I had just taken up a tenure-track position at a university and moved thousands of miles from the rest of my family and friends. My husband had moved with me.

This morning I reread an English translation of the paper Brossard delivered at the Dubrovnik conference. I can’t find the word “lesbian” anywhere.

This is what I knew in 1988:  I wanted connection with other women and I didn’t want to change. I wanted a different life but I didn’t know how to get there.  I couldn’t be a lesbian.

For five decades, Nicole Brossard has been investigating questions of multiple identifications, affiliations, and kinships.  For her, writing the word “lesbian” was an “exercise in deconditioning,” a means by which to assert her existence and acknowledge her “legitimacy” (These Our Mothers 16).

[m]otherhood shaped my solidarity with women and gave me a feminist consciousness as lesbianism opened mental space to explore. (77-78)

53% of white women voted for Donald Trump. I might have been among them.

Nicole Brossard has been a key figure in my intellectual life for thirty years. In 1997,  Lynette Hunter, Marta Dvorak, and I co-organised a conference on “Women and Texts: Languages Technologies Communities”  under the banner: “Coming together to work on expressing what is valued in our daily lives.”

Our inspiration came from Nicole Brossard and we cited her on the conference poster:[1]

I imagined my thought that day: attentive to movements that spread out in a spiral in books written by women. I was virtually struck by the internal logic which constantly beckons women to merge/to expel themselves.

For Brossard, the spiral opens “and the new circulates, circulates, producing emanations such as those at the gates of an initiatory path” (Translated and quoted by Gould 83; from Le Sens apparent 14).

Even into the mid 1990s, we believed that the new was opening before us. I took the following celebratory photograph: Brossard with her arm around writer Audrey Thomas, alongside Jeannette Armstrong and filmmaker Alanis Obamsawin. 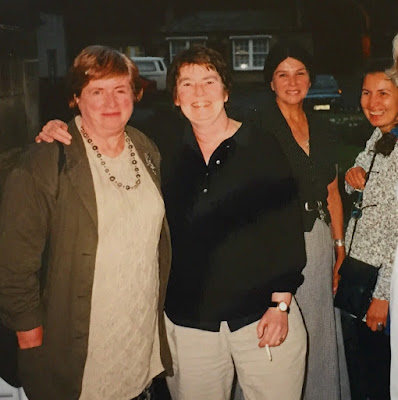 In 2017, we again need solidarity yet our trajectories are different. As feminists and/or trans we want to identify as women and yet we want alternatives to the symbolic order in which the category of woman has been so narrowly constructed.

In the 1970s Brossard identified patriarchal motherhood as the place where the concept of woman was most fraught. The problem lay in the fact that, in Brossard’s words, “patriarchal mothers” (18) are “able only to initiate their daughters to a man”:

There is no confidence between us. Sold-out at a loss. Split in two. (18)

In contrast to the misogyny perpetuated by patriarchal motherhood, Brossard’s experience of lesbian motherhood offered an alternative based on loving connections.

I write so I won’t engulf and hurt your bodies and so as to find in them my void my centre. (13)

Instead of reproducing the mother-role of patriarchy, Brossard creates “her own locus of desire,” finds “her own place at a distance” (18):

She who is writing in the present between barbed wires remembers her past. Maybe they’ve been forced to cut the current. She goes through.  (These Our Mothers 18)

I think of a photograph on Facebook of an African-American woman at the New York City women’s march. She carried a placard reminding us that 94% of Black women voted against Trump:

I almost missed meeting Nicole Brossard that day in Frankfurt in 1988.  I had read The Aerial Letter in a feminist theory graduate course. But when I spotted it atop a pile of feminist theory books beside a handsome woman on the ottoman across from me I thought, she must be a colleague.

I looked again and recalled seeing the photo of Brossard with translator Marlene Wildeman at the end of The Aerial Letter.  Could it be her?

She caught my eye and smiled. I was tongue-tied and brave. I took her hand and said what I could. She listened and spoke. We became friends and moved forward, at first haltingly, then with confidence, over many years, together.

I’ve been thinking recently about what we – in our radical differences – are going through now. In 2006, I finally came out. I have very short grey hair and am middle-aged. I’m often addressed as sir. Yet the pull of family and motherhood, the privileges of middle-class whiteness and cisgender, and conventional ideas about what women are supposed to be still shape me.

I didn’t attend the women’s march in London because of a long-standing family commitment.
It was my lesbian partner’s mother’s 70th birthday and a gathering in Shropshire the weekend of January 21, 2017 had been planned months ago, when the idea of a Donald Trump presidency was still a sick joke.

Trump’s presidency is now a terrifying reality. And the pull of family still shapes my queer life. To what extent am I still overdetermined by patriarchal structures?  What role have my choices played in the election of Donald Trump?

More overtly than I have seen in my lifetime, patriarchy is taking what exists and making it not. Yet as I reread the work of Nicole Brossard in 2017, I no longer feel terrified or alone. We will get through.

For the ongoing global feminist work of the artists, writers, and academics who participated in the 1997 Leeds “Women and Texts” conference including:

Note: This incomplete list of participants is taken from the Abstracts published by the University of Leeds. My memory tells me that Caroline Bergvall and Daphne Marlatt were also in attendance.  Please email me at S.Rudy@qmul.ac.uk if you attended the conference and are not listed above.  I am preparing an archive of conference materials and for the historical record will add your name to the list. 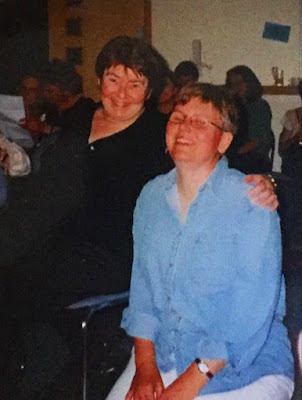 Susan Rudy is a London-based researcher, writer, and editor. Currently a Senior Research Fellow in the School of English and Drama at Queen Mary University of London, she taught in the Department of English at the University of Calgary from 1988-2011. Susan’s research expertise is in contemporary experimental writing and feminist theory and she has published widely in these areas. In 2016, she published blogs at The New Statesman on what gender and gender equality mean in the twenty-first century. She and Georgina Colby are developing a Salon for Experimental Women’s Writing (SEWW) in London. This piece is from Queer Openings, Rudy’s new book. For more, go to http://www.sed.qmul.ac.uk/staff/rudys.html.
Nicole Brossard (left) and Susan Rudy at the “Women and Texts: Languages Technologies Communities” Conference, University of Leeds, 2-5 July 1997.

[1] Poster for the 1997 “Women and Texts” conference at the University of Leeds. 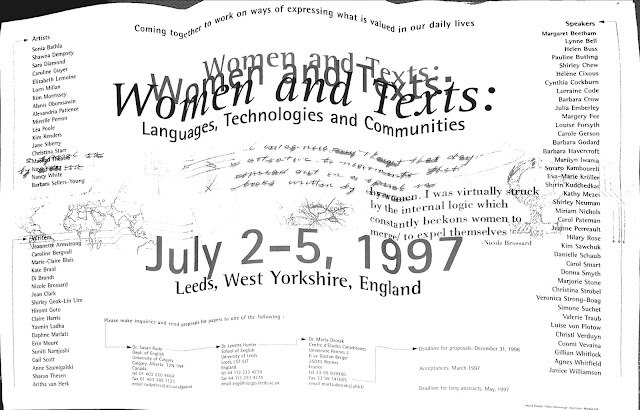